Most Notable Ads of Super Bowl 2018 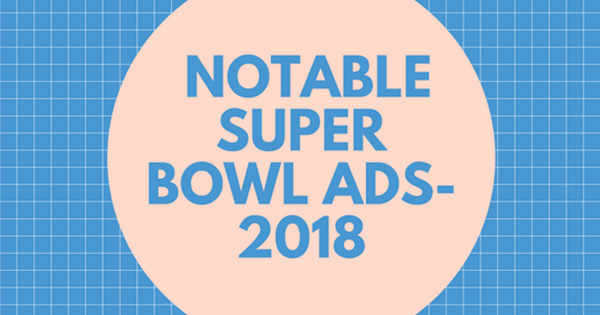 With the expected tune in of 100 million viewers for this year’s Super Bowl, NBC charged around $5 million for a 30-second spot. To make the most of their investment and grab the attention of viewers, companies get pretty creative. From lip-synching, to flash-backing, to the time of dinosaurs, here are the top 5 most notable ads from Super Bowl 2018:

Hyundai used its ad time as a surprise “thank you” to their customers, and tugged at the heart-strings of everyone who was watching. After inviting Hyundai owners to an interactive Super Bowl experience, metal detectors were replaced with “hope detectors,” and asked owners to step into a separate room. A video followed, with a childhood cancer survivor thanking the owners for choosing Hyundai due to the donation made to efforts following every purchase. With emotions already running high, the cancer survivors then walked out from behind the screen and thanked the owners in person, cuing tears across the nation. Many owners and people of the general public were unaware of Hyundai’s efforts, and the company spread their philanthropic motives while gaining some new fans.

The rivalry between Doritos Blaze and Mountain Dew is brought together in a fire and ice show down including Game of Thrones actor, Peter Dinklage, and Morgan Freeman. The ad starts off with Dinklage rapping Busta Rhymes, and switches to Morgan Freeman rapping Missy Elliott. Amidst the hip-hop showdown, fire engulfs the Doritos ad, and ice takes over the Mountain Dew ad. Viewers took the ad a step further, and related themes of fire and ice to the Game of Thrones rivalry between two main characters, Khaleesi and the White Walkers. Tying in various aspects, the two ads worked together to entertain and provide an absurd experience for all who tuned in.

The rise in artificial technology is something that excites and scares society, and Amazon seems to always have been in the front lines. With the new smart speaker, Alexa, tasks seem to be effortless due to the fact that the voice does whatever it is told, and her voice has become synonymous with ease. To play with this idea, Amazon’s ad follows the hypothetical question- what if Alexa lost her voice? Implementing multiple replacements ranging from Cardi B to Gordon Ramsey, responses and questions from Alexa owners receive a range of responses based off the replacements’ characteristics. Hilarious, fascinating, and tugging at the deeper meaning of Alexa in consumers’ lives, Amazon’s ad successfully restated the products position in the market.

Jurassic Park has always been an intriguing cinematic journey for all viewers, and the idea of surviving during the time of dinosaurs draws the attention of millions. Jeep decided to capitalize on this, and implemented the journey of Dr. Ian Malcolm and his chase from a Tyrannosaurus rex into their ad space- and it was brilliant. While viewers are immersed into Dr. Malcolm outsmarting the dinosaur and experiencing victory, it turns out the entire scene was a test drive he imagined while sitting inside a 2018 Jeep Wrangler. After seeing how the Jeep held up against a T-rex, I’m sure customers won’t question the durability of the car.

What is the purpose of Tide in consumers’ lives? The answer to this simple question is what drove the company’s entire ad space during the Super Bowl. Instead of showcasing a singular ad, Tide kept running with their idea that clean clothes in any setting is a Tide ad, and successfully implemented the purpose of the detergent into every single generic ad. A slight chuckle will turn into a full on grin watching David Harbour interrupt and reclaim commercials back to the main idea of Tide.