As of 2016, 1.4 million Americans identify as transgender. And yet, market research is still conducted with strict sampling requirements for male and female respondents, without options for trans and gender-nonconforming people. With a lack of research, advertisers still lack an authentic picture of trans consumers.

Historically, mainstream advertising adopted media tropes from television and film to represent trans people; however, the future of trans representation emphasizes authentic business practices, real trans stories, and the hiring of trans employees in the ad industry. Here’s a general list of do’s and don'ts when communicating to trans audiences.

Like any general population in the U.S., the LGBTQIA+ community is abundant and requires segmentation when looking for target audiences. It’s critical to avoid grouping the community into one niche market to avoid stereotypes or insensitive communication. Are you talking to Black gay men aged 30-54 or trans women in the Austin-area? Each of these identities has different needs, and require knowledge of intersectionality, LGBTQIA+ history and current issues facing them.

DO foster equitable and safe work environments for trans folk.

Six in ten Americans believe LGBT advertising must entail hiring diverse advertising professionals. The hiring of trans and gender-noncomforming people is essential to promote an image of authenticity and better understand how to communicate with the trans community. A room of cisgender marketers will never understand what it means to be a trans man or trans woman in America. By hiring trans people, we as marketers learn where to look for target audiences and when we should step back. Agencies can create equitable and safe work environments by:

Rainbow washing defines the promotion of products or services to LGBT consumers by brands that lack organizational policies and practices that “protect and/or support sexual and gender minorities.” Whether it be Burger King painting its burger wrapper in rainbow or the slew of rainbow-colored brand logos in June, rainbow washing is likely not to get a positive response from trans consumers. Instead, ask yourself: is this communication, product and/or promotion serving trans consumers? Mastercard’s True Name initiative avoids rainbow washing completely through real change. The campaign served the trans community by helping the 32% of people who reported negative experiences for showing an I.D. with a name or gender that did not match their presentation.

DO acknowledge the power of representation

As advertisers, we inform consumers how to shop, where to shop, and for what. Through these practices, we create images of what the marketplace looks like. It’s a powerful tool. So, we must use it responsibly. Yet, without the hiring of trans folk, gender-inclusive marketing research, and better representation, we have failed to reach all markets. The future of trans people in mainstream advertising is still blurry. Yet, their existence is no longer a heated debate or a joke, but rather an essential factor in creating a more inclusive and ethical advertising industry. 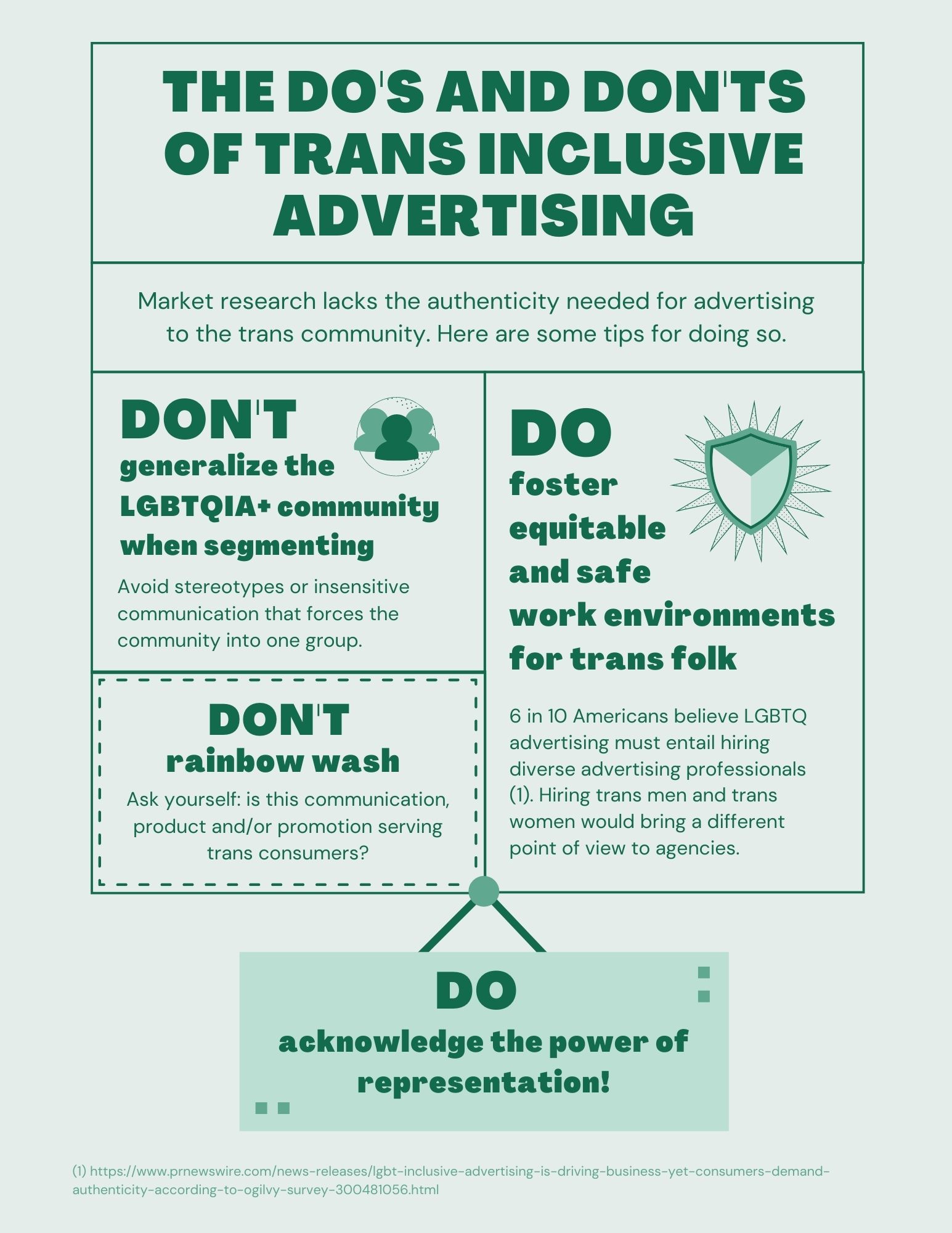