This Sunday, the nation saw not only the Broncos and Seahawks duking it out on the field for the coveted Super Bowl trophy, but brands attempting to be heartfelt, funny or just plain weird (cross-breed dogs, anyone?)

The Twittersphere also saw the second-annual #AdGradBowl social media initiative from Texas AdGrad. Students, organizations, alumni and professors joined the conversation and shared their thoughts on Sunday’s most memorable ads.

Game-watchers were treated to flashbacks of years past with cameos from your favorite trio of uncles, an old friend from The Matrix, and even a reunion of Seinfeld proportions. Looking back was certainly a strong motif in ads this time around.

Attention was not only on the ads, but also on brands’ social media accounts as people kept an eye out for this year’s “Oreo moment.” Last year, Oreo took “live-tweeting marketing” to a whole new level by a blackout-inspired tweet. 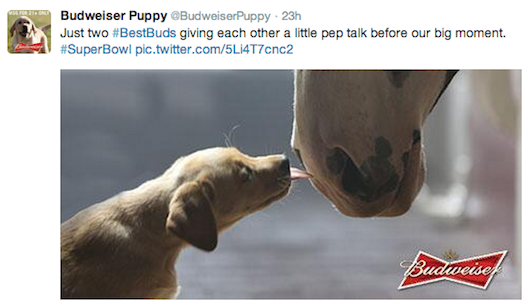 Social media sideline spectators immediately noticed something funky going on with JC Penny’s Twitter account. Was it a social media intern gone rouge or a member of the team having too much fun at the game? As it turns out, they were allegedly typing with mittens, causing the typos.

By the fourth quarter, even people with minimal interest in football could see how the game would end. Brands still had sometime to steal the advertising stage and they sure did. Among the last ads of the night, people were treated to “the cherry on top” of the game’s Budweiser advertisements.

A social media initiative growing out of its infancy with a second year under its belt, #AdGradBowl saw great engagement by Moody College faculty alumni, students and organizations.