With the growth of social media also comes the growth in participation of controversial topics surrounding social issues. The public decides who’s right and who’s wrong, but rarely does anyone agree to disagree. Brands also have begun to engage with these topics. While some have made public statements, others have released advertisements. In this era of sharing beliefs, brands seem to have much to gain or lose. A study by Edelman found that more than half of consumers “buy on beliefs.” Belief-driven buyers, as Edelman calls them, align themselves with brands whose beliefs agree with their own. But what does it mean for companies to associate themselves with certain ideas? We asked three Moody College of Communication professors—Professor Angeline Scheinbaum, Professor Michael Butterworth, and Professor Erica Ciszek—to weigh in on this, and here’s what they thought: 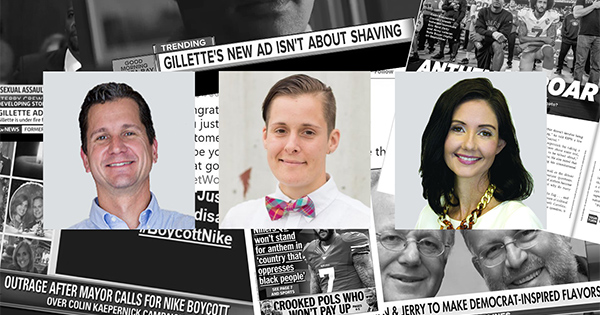 Do you think social activism has become profitable or trendy? Why or why not?

Scheinbaum: “Emotionally, you have more desire to do business with a company that you like, who stands by your values. It all comes down to values, at least that’s what research would suggest.”

Butterworth: “In some ways, it’s a natural evolution from other kinds of efforts that [the public] would usually put on the label as corporate social responsibility or cause-related marketing. That’s not entirely new. Advertisers have figured out—for at least a generation or two—that if they can link particular lifestyle choices or political commitments to their product, there’s an investment. It’s obvious that people are taking note of social activism or political activism in a broader sense.”

Why are advertisers doing this? What are their real intentions?

Butterworth: “Nike is a really good case for this. The tagline for the campaign with Colin Kaepernick was, “Believe in something, even if it means sacrificing everything.” Well, what is it that Nike will have us believe in? Because as much as they are featuring Colin Kaepernick in the two-minute TV ad, Serena Williams and other athletes of color, they have said nothing and done nothing to suggest that they are interested in believing in the thing that got Kaepernick in the spotlight in the first place. So, where is Nike’s statement on police violence? Where’s Nike’s statement on the stage of race relations as it relates to law enforcement. It's not to be found because “believing in something, even if it means sacrificing everything” is ambiguous enough that it can mean anything ideologically. It doesn’t have to come from a particular persuasion or about a particular topic. It’s elastic and brilliant marketing. From a marketing and advertising standpoint, it is brilliant. From a political standpoint, I think it’s more ambiguous and I’m less enthusiastic about that.”

Ciszek: “I think it’s in the best interest of a brand to align themselves with issue and causes that are in line with who they are as an organization.” “if you type in Gillette ad backlash. It didn’t seem genuine. It was inconsistent with their messaging 10 years earlier—“The best a man can be”—and the imagery they showed. Also, I wonder what sort of larger strategic communication efforts, organizational efforts, they’re doing to try to tackle what they’re perceiving as toxic masculinity. It has to be part of a holistic effort.”

Scheinbaum: “It has to be authentic. We all know that we are being persuaded or sold to, and younger generations and millennials, especially, can sense the lack of authenticity. It feels like a money grab or worse you’re using a social cause to make money if it’s not authentic. And that can be very bad business and PR. If it’s sincere, then profits can flow. It’s not because they picked this cause, it’s because here’s a brand that has values, stands behind its value, and is willing to put themselves on the line…

Do you have an example or idea of a brand who did it right in your opinion?

Scheinbaum: “I really like the Stella Artois campaign from the Super Bowl last year [2018] because it seemed sincere and a good fit. It was something to the effect of for every beer you buy, the proceeds of this will be for people to get clean drinking water. And that’s an epidemic. The lack of ability to get clean drinking water, it’s a big problem in so many parts of the world. I think that’s a pretty good example of an ad. They thought of something important. Here’s what I also like about Stella Artois and that campaign ... they picked a movement that’s very, very, very important, but it also is safe for them in the sense that it was a good fit. We don’t hear people disagreeing the fact that every human being deserves clean drinking water. That’s not a controversial statement. That’s a human basic need. So, I thought that that was a very, very, good fit for their product.

Ciszek: “Ben and Jerry’s as a company. Historically, if you look at who they are, their mission statement, the vision, all of that stuff. They are an ice cream company or a frozen treat company that closely aligns themselves with social justice and advocacy. A few years ago, they were one of the only brands to publicly support black lives matter. That is consistent with the brand because historically, they have stood up for anti-trafficking; they’ve stood up for gay marriage. They’ve stood up for a plethora of social issues. So that’s consistent with the brand. I think Ben and Jerry’s is getting it right.”