Every year, the American Advertising Federation hosts the ADDYs, a night where Austin’s professional and student creatives get rewarded for giving up their once-vibrant social lives. The theme this year, “Another Night Without Your Family,” rings true for more than those who are willing to admit it. On Tuesday night, students from UT Austin’s Texas Creative Program brought home gold, silver and bronze ADDYs for their roles as art directors, copywriters and designers on various projects. Sabrina Lau, a third year art director in her second semester of the program, brought home Student Best of Show for her Talkspace print campaign. We met up with her to learn a little bit more about her work. 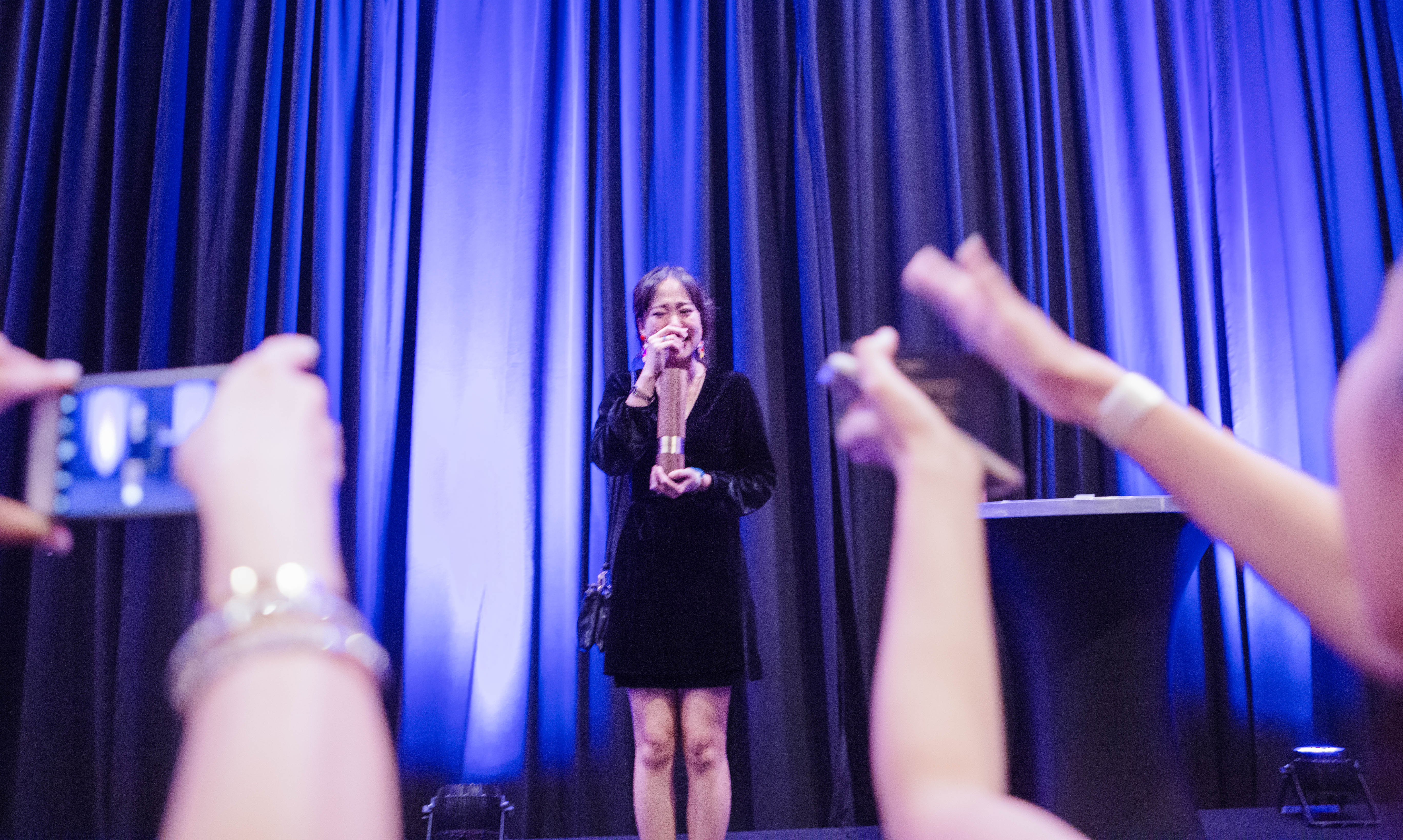 What was the thought process behind your Talkspace campaign?

Talkspace is an anonymous mobile therapy service that allows anyone to get the mental health help that they need and deserve. The overall purpose of this campaign was to prove that effective therapy does not necessarily need to be face-to-face. I chose this product because mental health is something I take incredibly seriously and that will always be close to my heart. When you're passionate about something, you obviously want to do it justice, so I knew the concept behind the campaign had to be something that could be felt across all spectrums; it had to be shockingly unexpected and severe, because that's exactly how mental illness affects us. Although one in four people experience some form of mental ailment at some point in their lives, it is becoming increasingly neglected. We’ll never truly be able to completely understand the emotions of someone other than ourselves; however, we should be more active and mindful about empathizing with one another.

What was going through your head when you found out you won Student Best of Show?

I'll probably go down in history as being the most tragic student winner for Best of Show, but when they announced my name for the award, I wasn't there. Yeah, you guessed it: I was in the bathroom. I had no idea this award existed. They had already announced that I'd won gold for Magazine Print, so I thought my brief moment in the spotlight had passed. I decided to slip out, and immediately started getting confused texts from friends and family. It was kind of insane - like I couldn't mentally process it and I felt like I was in a daze the whole time. All my peers kept congratulating me, but nothing was really sinking in. But the water works eventually came after the ceremony was over and I went to go get my award. There are some incredibly ugly crying pictures to prove it.

There are so many different things you can do with an advertising degree. What made you gravitate towards creative, specifically art direction?

I've always admired artists and have the most utmost respect for them. However, growing up, I was the most insecure person I knew. And if you're an artist and/or creative, you know that you are your own worst critic. I never took formal studio classes, so I never thought in a million years that I could do something as hands-on as what I'm doing right now. I sort of just jumped all in to advertising without knowing what I wanted to get out of it. That changed when I took ADV 325  and everything that had to do with being a creative just spoke to me. It's hard to explain, but when you know, you just know. Art direction is all about the minute details that everyone tends to overlook, but have the power to change the way people perceive whatever they're taking in. I've always been an observant person, so being able to identify with what an art director does was a revelation.

What advice do you have for students thinking about applying to Texas Creative or wanting to work in a creative field?

You're going to question yourself every second of your life, and there's no way to avoid that. You're going to hear a lot of "no's" and get an overwhelming amount of rejection. But the thing that's going to set you apart from the rest is resilience. I think it's so important not to think of all these of rejections or "no's" as failure - because they're not. Not finishing what you've started, and without a driven mindset at that, is failing. If I had one piece of advice, it would be to be your most authentic self. Showing your art to the world is probably the scariest thing a person can do. And it's so easy to revert back to normal, bland ideas that have been done a million times (and then some) because you've just exposed so much of yourself to the world - you're vulnerable now. But with that, I say forget normalcy, because that doesn't get you anywhere. People are going to give you strange looks and have a their own opinions. Take it with a grain of salt, but keep doing what you do. If everyone likes what you're producing without question, then you're doing something wrong. My first lecturer for Texas Creative, Ryan Romero, taught me that, and I honestly can't thank him enough for being an enormous inspiration to me.

What brand would you love to work on?

I feel like I should probably know the answer to this by now, but I don't. I'm still exploring because I still feel like I'm new to this whole process. I've been wanting to work on more social causes than actual, physical products, so I hope to do that in the near future.

What direction do you see your work taking in the future?

I wish I had a better answer for this, but I truthfully don't know. This whole ADDYs thing caught me really off guard, so that just goes to show how prepared I was for this. I know I have an insane amount of growing and learning to do, so I just want to soak in as much as I can before I get to the age where it's my job to tell other people what to do. I'd love to end up in New York at some point in my life - I've heard they really beat you down up there, and really teach you what it is to be a creative. All in all, I want to continue learning and creating - because that's why I'm doing all of this in the first place.